We were up early the next morning and, in misty fog, left Glacier Bay for Hoonah, 35 nautical miles down the Icy Straits.  We had decided the night before to continue on our voyage as we had a good weather window and it was getting late in the season.

We knew there was going to be so much more to see as we worked our way down the coast and we didn’t want to miss it.  We ghosted out with the current and the fog lifted, as we rounded the northern tip of Chichagof Island.

Approaching Hoonah harbour, we passed an enormous cruise ship docked beside a complex of buildings where passengers could see native cultural displays and exhibits, buy crafts, dine in several restaurants and even have a zip line adventure!  We learned later it was a converted cannery.

The actual village of Hoonah was a couple of miles further in – a hodge-podge of small homes and docks which were in sharp contrast to the Disneyland-like cruise ship terminal.  Totems rose along the main street and we could see a few commercial establishments as well as a haul-out boatyard as we sailed past.

We had just tied off on to the transient dock when we noticed a tall young man furiously rowing a tiny wooden boat toward us.  He was Haidan Smith – a former student of mine and friend of ours.  He had built a Brent boat, like Steve Millar’s, and outfitted it himself.  He was in Hoonah working in the boatyard with his girlfriend, Angie, who was also living on her own boat.  Both of them were anchored off the yard.  It was great to see him as his was the first face from home we had seen in over a year.  No sooner had he arrived, when another boat tied off beside us – this time with Ian Shepherd, another cruising friend, with his friend Buck.  They were on a fishing holiday, looking for halibut and cruising down the outside to Sitka.  We were all pretty excited to see each other, amazed that our paths had crossed – even for a few minutes.   The world truly is a small place. 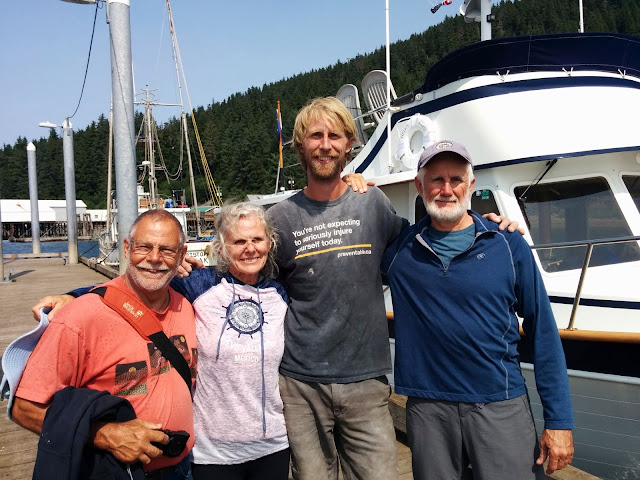 A little later we moved Ka’sala over to the municipal docks behind the village breakwater.  It cost $25 USD a night with no services, though for a price we could get showers and do our laundry at the harbour master’s office. 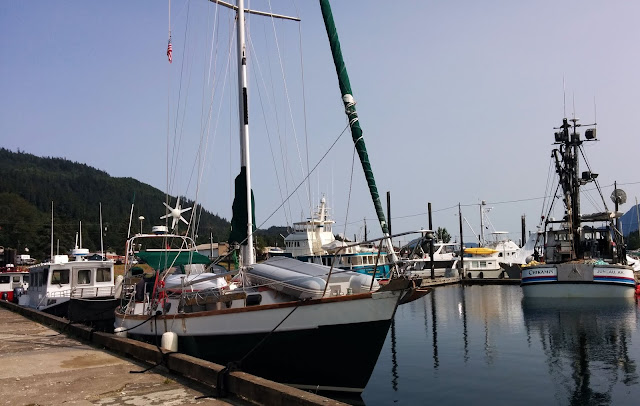 On the two nights we were there Haidan had dinner with us.  We were happy to meet his girlfriend and visit them at the boatyard.  We wandered the village, meeting various indigenous artists working in their shops and bought a few groceries from a well stocked little store.  Hoonah is all about fishing and we saw many people coming back with good catches.  I won't forget one catch which consisted of a halibut so big, the fisherman shot it to get it aboard.  It took two grown men to drag it down the docks to clean. 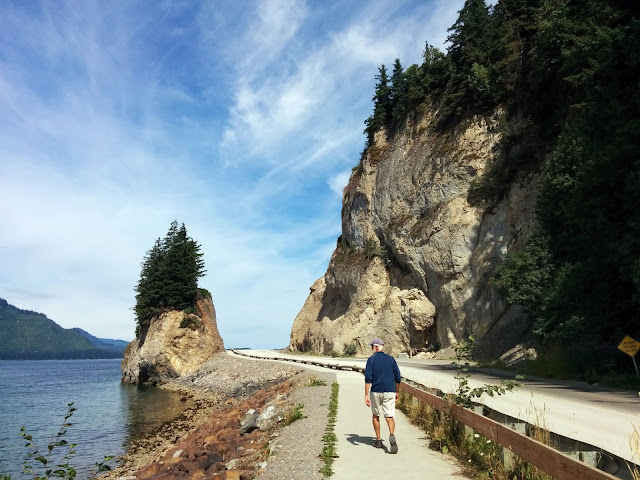 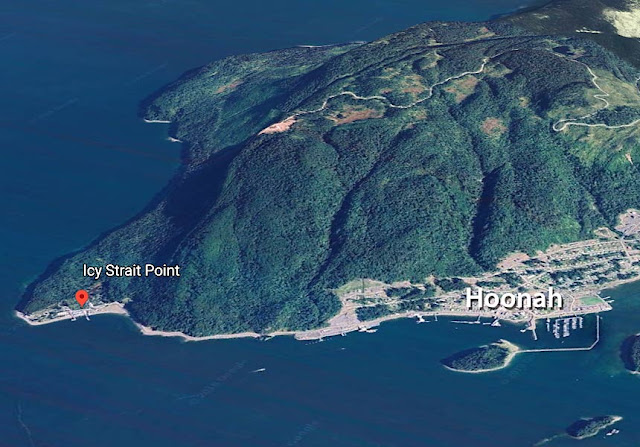 Posted by Lyneita at 4:06 PM No comments:

You can’t just sail into Glacier Bay National Park.  Due to ecological concerns, the number of people and boats allowed in at any one time is restricted to permit holders.  Additionally, before you can explore the glaciers, you are required to attend an orientation session in Bartlett Cove.  We had applied for our permit online in Hawaii and found choosing dates a difficult thing to do as we didn’t know how long it would take us to sail from there.  We arbitrarily chose a week beginning July 23, thinking that would give us enough time to get to Sitka and sail north.  We had heard from others that if we arrived sooner, and were close to the park, we might be able to get in earlier if someone else failed to make their arrival time.  We were fortunate and entered the park on the 21st.  After an early breakfast in Mud Bay, we close hauled across the Icy Straits and arrived at the transient dock in Bartlett Cove just in time for our orientation at 11a.m..

The half hour briefing was interesting, but fairly straightforward.  It was obvious the parks services go over and above to ensure Glacier Bay remains pristine and unspoiled.  Afterwards, we strolled up to the lodge – a gorgeous 30s style wood and beam structure. 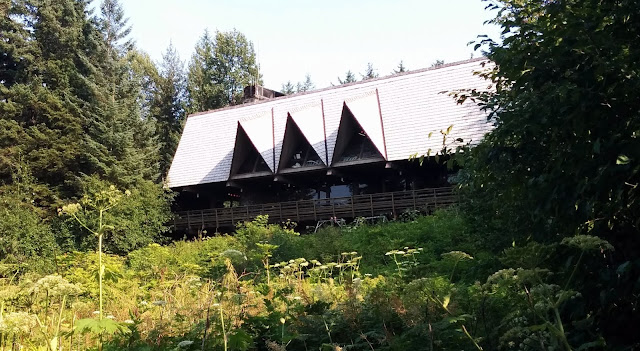 While there we checked out the museum and watched an introductory film on Glacier Bay, then took advantage of their excellent WiFi to catch up on correspondence.  We decided, rather than immediately taking Ka’sala up into Glacier Bay, we would spend a day in Bartlett Cove exploring, then take the 8 hour tour of the entire Bay on a catamaran to get an overview.  If we decided we wanted to take Ka’sala in afterwards, we still had several days on our permit to do so.

We anchored in Bartlett Cove and in the morning rowed the dinghy over to the dock.  We spent the day hiking around the park, visiting the Hoonah Tribal house, Park Headquarters, forest trails, glacier ponds and rocky beaches.  We were a little nervous to go too far afield as there had been numerous, recent bear sightings close by. 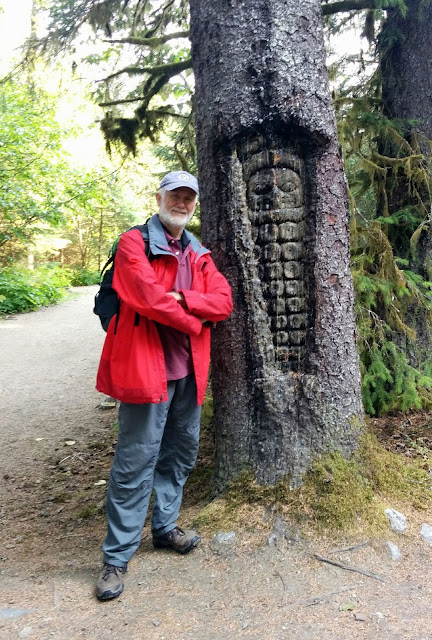 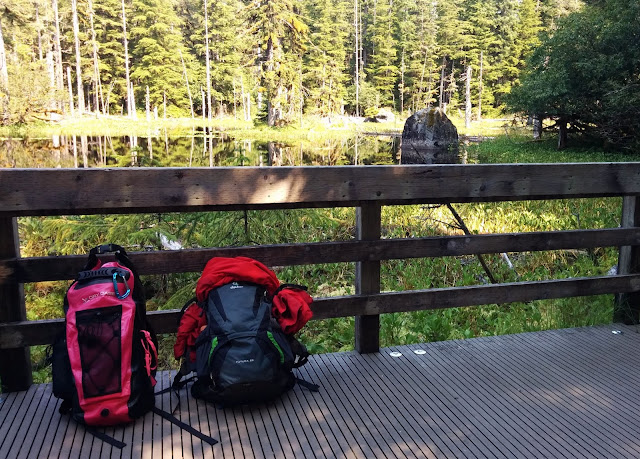 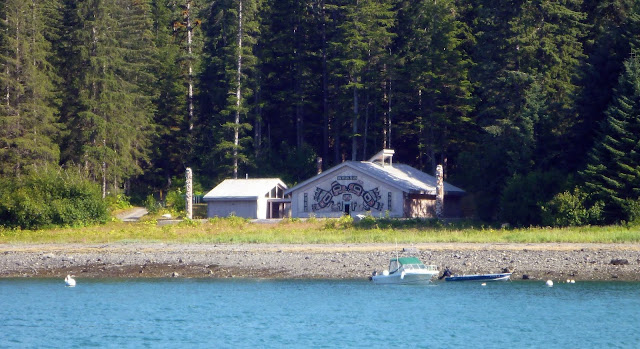 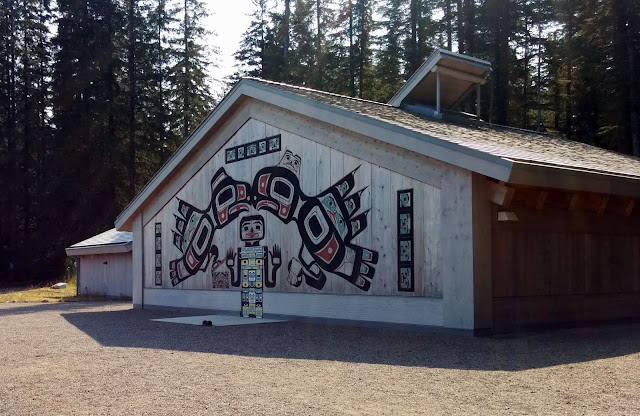 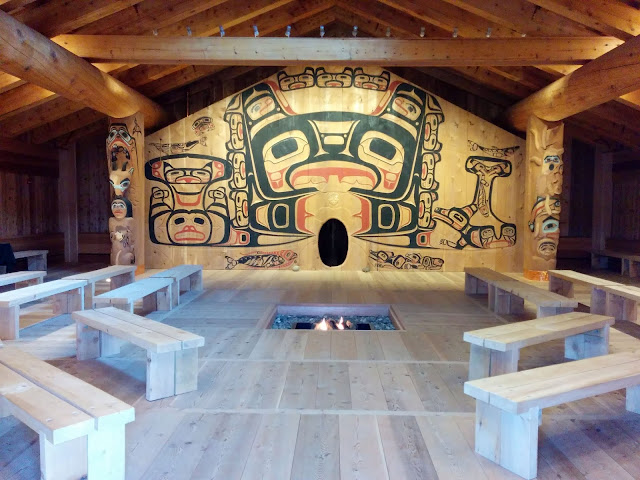 We spent more time at the lodge where we were able to buy hot showers – very luxurious after several weeks of washing up in the galley sink!  Afterwards we lounged on the sunny deck, enjoying an ice cold draft beer. 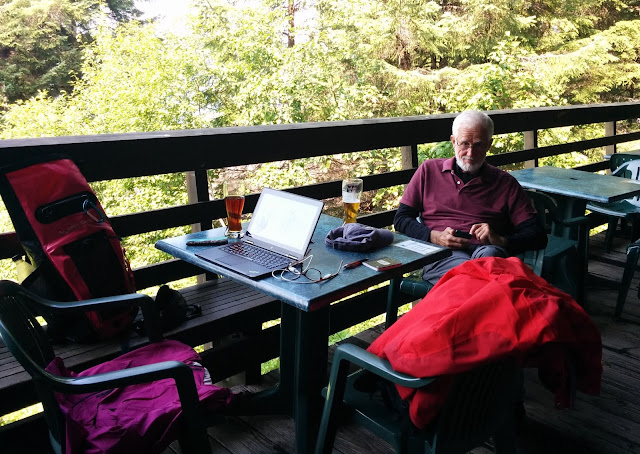 We returned back to Ka’sala for a celebratory salmon dinner - we had reached our northernmost destination.  What a splendid day! 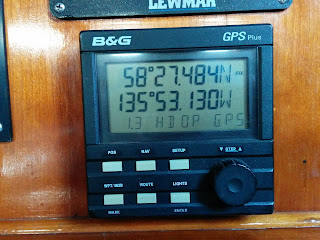 The next day we were up very early to catch the boat for our Glacier Bay tour.  Baronof Wind, was a double-decker, aluminum catamaran that used to be a ferry.  There were about sixty people aboard including a very friendly crew and a park ranger who was a nature interpreter.  We liked the idea that we could spend the entire time just sitting back, relaxing and enjoying the entire voyage without having to worry about Ka’sala, the weather, currents, iceburgs, funnelling winds and anchorages. 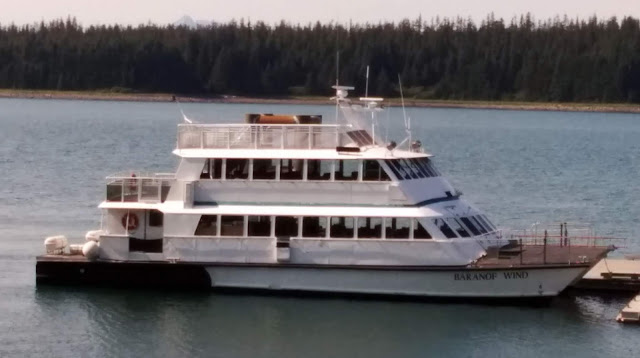 I still don’t have all the words for what we experienced over the next 8 hours but I will try. 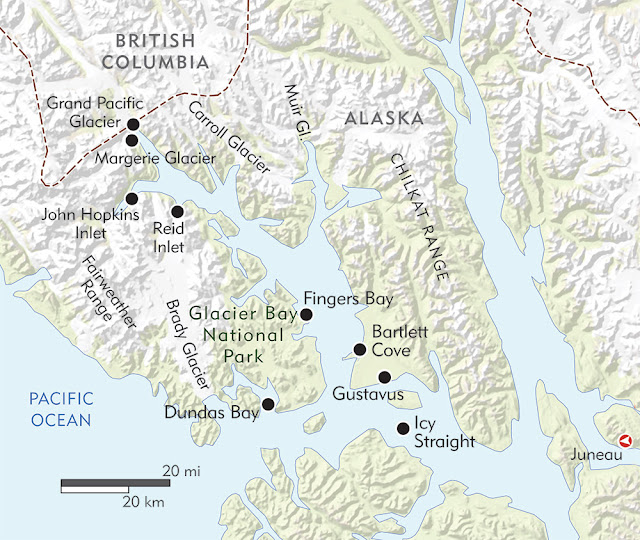 The day was perfect with not a cloud in the sky and as warm as it ever gets in that area.  We saw all the mountains, peaks and ranges against that sky – at times surreal in their cragginess, snow patched and blanketed, bare rock, enshrouded with shrubs, purple fireweed and lichen.  Because there were few large trees, we could see for miles. 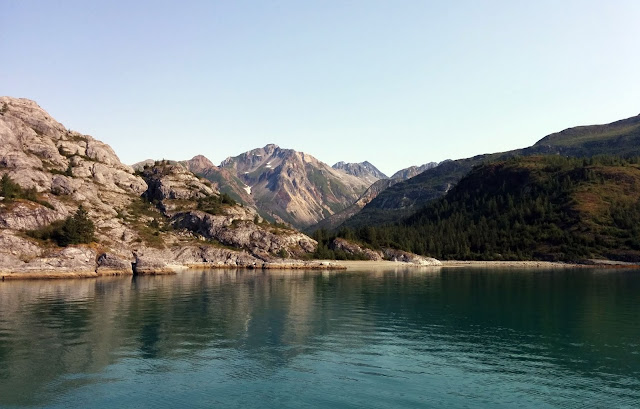 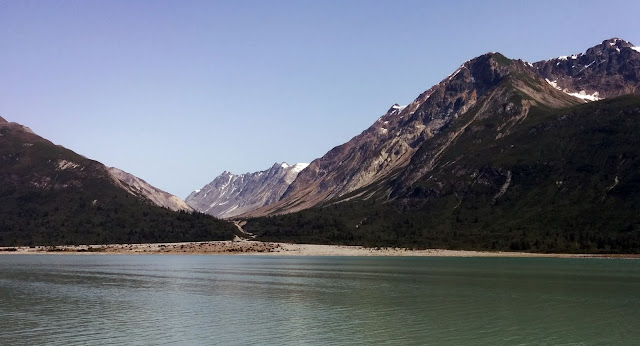 The water was a pewter green and almost at the freezing point. 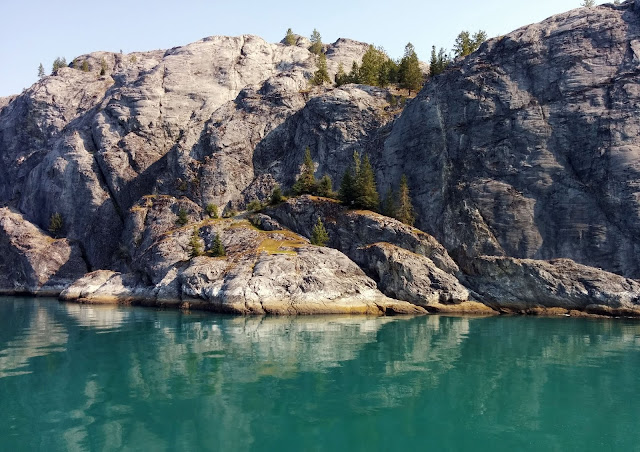 Toward the top of the inlet the water was full of small iceburgs with chunks of ice floating by, some melted into spectacular natural sculptures. 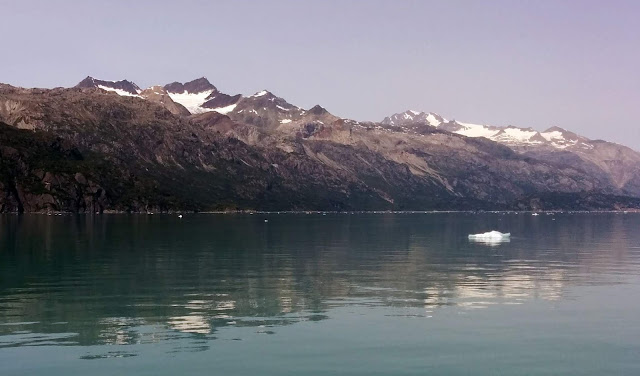 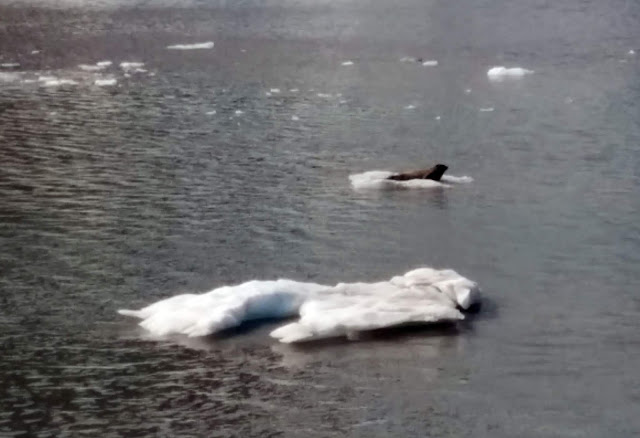 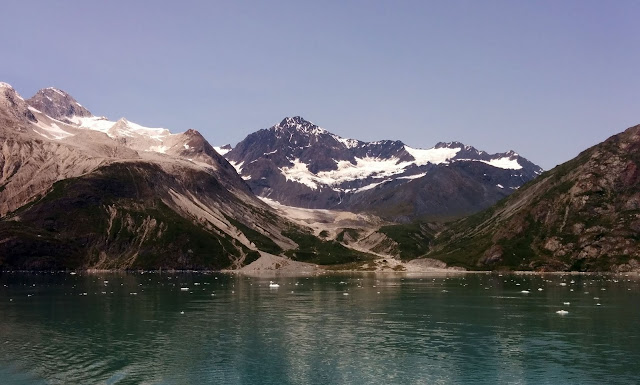 Small inlets, bays and islands unfolded as we cruised along, the landscape becoming more primordial as we got farther in.  Along one granite cliff face we saw several enormous, pure white, mountain sheep grazing.  I could scarcely believe they didn’t fall as they wandered on their tiny, dainty feet along the fissures in the rock face.


A little further on we saw a momma grizzly bear with three (yes, three!) cubs foraging on the beach.  We did see some humpback whales blowing in the distance but, unfortunately, no leaping displays like we had seen in Mexico.  There were sea otters playing in these frigid waters, seals lying on larger chunks of floating ice and sea lions basking on islets. 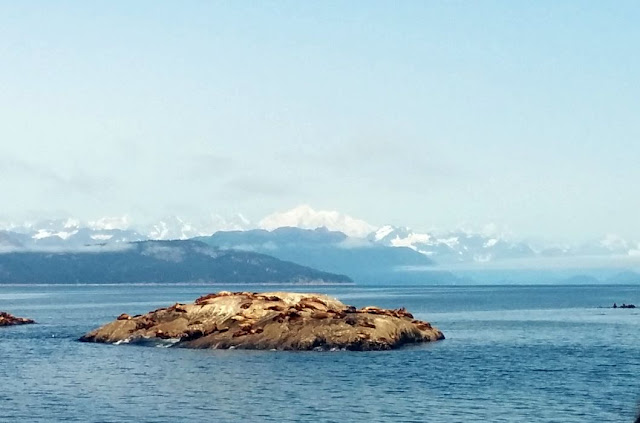 Later we saw a black bear on the shore.  He was curious about us and posed on some boulders for those with great camera lenses.  We saw many birds of various species and cruised by some of their protected nesting grounds.  Two types of puffins really stood out, looking almost tropical with their enormous, orange beaks and floppy mohawk head feathers. 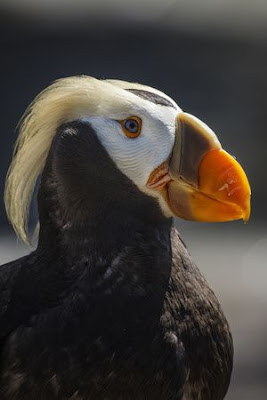 Then we arrived at the glaciers.

Margerie was right at the water’s edge and, as we sat in front of it, we watched chunks of ice slide off with a roar into the water and heard the rumbling and snapping of the living ice yet to fall. 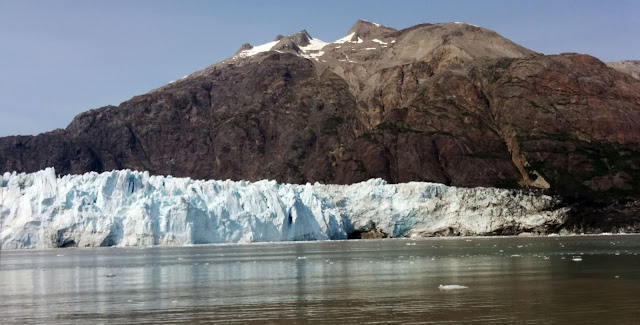 When a larger chunk came down, a big wave would spring up and rock our boat.
In the wall of ice we could see extraordinary shades of white and crystaline blue, pock marked by dirt and pebbles, and seamed by extraordinary cracks, fissures and crevices. 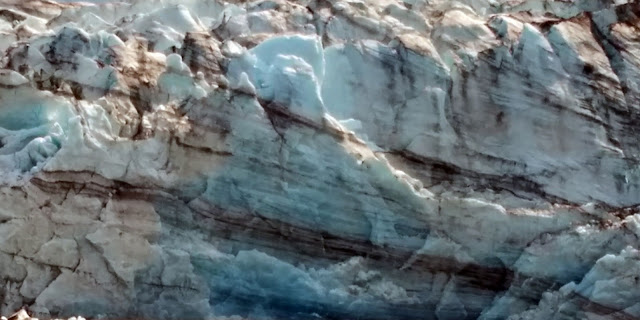 Flocks of gulls circled around the face of ice while eagles, ravens, and crows gathered nearby; their cacophony of cries deadened by the grinding sounds of the glacier.  The sunlight fractured against the ice wall, while the waters below were brown from the action of the calving. After Margerie, we headed up Johns Hopkins and Reid Inlets to see more glaciers, thrilling to the spectacular vista of mountains, hung glaciers, valleys and terrain carved by the retreating ice.  I think my mind was really short circuiting by this point with so much more to take in and no more words to describe it! 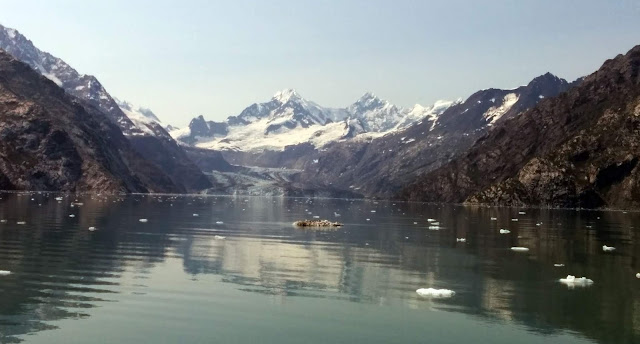 Eventually, we returned fairly quickly back to Bartlett Bay and I spent most of that time on the back deck of the boat, watching as this incredible landscape receded behind the rooster tail of our wake, trying to drink in every moment.

Although I did take numerous photos and videos, none could ever do justice to what we saw that day.  If I had been pinching myself to see if it was real, I would have had to be hospitalized! The sensation of being alive and witnessing these extraordinary events was an experience for which I will be forever grateful.

If you would like to comment, contact us, or give us feedback, without making it visable on the blog, please feel free to email us at: swanson.svkasala@gmail.com